You were all excited because you read my other post, but you didn’t pay attention to the part about needing a special version of qemu-kvm and were saddened to be hit with this:

Don’t fret, I’ll help you get where you want to go. Do everything as root, and don’t do it on a production system … duh

Get your development environment ready:

Get your source rpm and prerequisites – note that while this is current as of this posting, things could change. Up to you to handle keeping yourself current:

Install your binary and its dependencies. Enjoy blockcopy funcitonality:

In order for this to work you will need RHEV versions of qemu-kvm. The versions included in CentOS7 (my platform) don’t support the blockcopy command in virsh.

Start by dumping the xml for the domain to somewhere you can grab it again later:

Make sure the domain is not persistent:

The actual migration (you may wish to check that you’re not overwriting the target, highlighted in red):

Redefine the domain, double check it:

Verify that the source file is no longer the disk in use and erase the file (if you want):

Today I added the components that create a logfile and cleans up the working directory when done. The idea behind the logfile is that using the information in it a person with no knowledge about the original backup could use the files to create a running restore of the VM. I may someday create a restore script, but not today. The cleanup portion is not working 100%, but good enough that I will use the script in my production starting today. I will debug and fix it later. Here is the Bareos job log for my first full & successful running of the script/backup combo:

Per the request below I’ve attached my vmprep.py script (rename vmprep.py.txt to vmprep.py). I’m not a programmer, so don’t hate me if it blows up your stuff.

Here is my way. I’ve actually had this up and running for some time in another environment using SQL Server Standard 2008. I’m not in need of configuring a new backup for a 2012 SQL Express instance. There are a few parts, obviously. This article assumes you can configure a Bareos Windows client, if not there are plenty of other tutorials to help with that.

Part 1 is to create a sql command that will backup your databases to a file in the location of your choosing. I choose to keep all of my scripts as well as backup files in the same location so that if I ever have to restore I can figure out what it is exactly I did to get the backup working in the first place.

Step 2 is to create a script or batch file or something that Bareos can call to have the backup run. The file you execute should not complete until the backup file is created so that Bareos doesn’t try to backup the file until it exists. I believe Bareos even halts and “fails” the backup if the return status from the script is not 0, I’ll probably verify that later. Mine is a simple file that deletes yesterday’s backup then creates today’s backup:

I could add more logic here, but it seems I don’t need to. This has been reliable for me in the past.

Next Step is to configure the backup FileSet, Job and Schedule. Here are what mine look like:

The obvious key component is the ClientRunBeforeJob directive in the Job definition. This makes sure to run the MS SQL backup prior to running the Bareos file backup.

I should mention the reason I’m doing Full nightly… obviously this method could be renamed cheapass backup. As such there is no interaction between the actual SQL backup and the file backup Bareos is performing. You could do a differential backup (and I have in other installations where bytes are more scarce and databases are bigger) but the actual differential part of it is done way back in step one when you’re creating the MSSQL backup script. If you do this I recommend backing up to a separate file in that same all encompassing directory, that way all the crap you need is there, the scripts, the full, and the diff. If you’re backing up a 500GB DB and you only have a couple T to store to… you’ll have to do something like this.

And then we test… Did you expect this error, I did?

So last step is we have to run that .CMD in a security context that has rights to backup the database. The easy solution is to go back into your SQL Server Management Studio, expand the DB server, Security, and Logins then right-click on NT AUTHORITY\SYSTEM and open the properties dialogue. In there highlight Server Roles in the left pane then check sysadmin in the right pane. 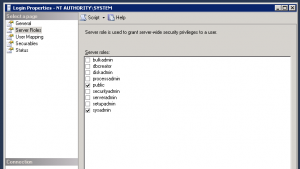 After this you can login to BAT or bconsole or however you choose and test your job again.

Of course even if it appears to work, you should test your restores, which is a whole different ball of wax. If you’re lucky like me you have a test server that you can do your restore to since testing restores on a production MSSQL system is an absolute bear. Remember, if you haven’t tested restores, you don’t have backups!